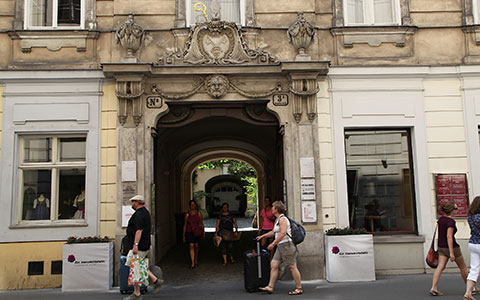 Willing to engage oneself – for active peace.

This address has tradition. There the IVB ‘Internationaler Versöhnungsbund’ resided for many years. The IVB is the Austrian branch of the ‘International Fellowship of Reconciliation’, Europe’s first oecumenical peace movement, founded in 1914. Today, people of all religions from more than 40 countries worldwide are members of this fellowship which supports various peace actions and educational offers for peace building and nonviolence conflict handling. The Austrian branch of ‘IVB’ was established in 1921. Today, a number of organisations share this office: Service Civil International, Counseling for Deserters and Refugees, Arge Conscientious Objection and KAMA (Course offers by Asylum Seekers, Immigrants and Asylum Entitled Persons).

“In the many non-governmental organisations, associations and groups that engage themselves for active peace the majority works voluntarily and mostly works without pay.”

The awareness of the importance of peace activities for maintaining and developing democracy is not yet very widespread. Characteristic for this is the barely perceived ‘Peace Decade’ that was unanimously enacted by the General Assembly of the United Nations in the year 1998 for the period 2001 to 2010 as the ‘International decade for a culture of peace and non-violence for the children of the world’. The goals of this decade were described in Resolution A/53/L25 which declares: Education, food, rights, health and respect must be secured for the children of this world on an individual, administrative and global level.

The worldwide actions supported by the UNESCO for this ‘Peace Decade’, were, however, – not only in Austria – barely perceived over and above the circle of the engaged groups. The media, television, radio and the print media only very seldom bring information and news on the subject of peace.