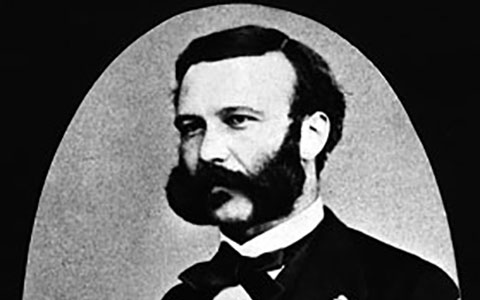 Honoring the first Nobel Peace Prize laureate with a plaque on the War Ministry.

The corner house on Am Hof and Bognergasse was originally the first War Ministry, the ‘Hofkriegsratsgebaeude’. Today it serves as a Five Star hotel. On an adorning plaque from that time of the original use of the building it calls to mind Henri Dunant (1828-1910). Dunant’s epochal deed, the establishment of the International Red Cross had to do with a bloody episode in Austrian history: the lost war against France and the Kingdom Piemont-Sardinia in the year 1859 and the therewith following loss of the Province Lombardy.
The largest battle was that of Solferino on June 24th 1859 in the vicinity of Lake Garda. Dunant, a Swiss business man, found himself in Upper Italy for business reasons and visited the battlefield the day after the gruesome massacre.
Deeply shaken, he realised that the medical care, in as much as it was even existent, was catastrophic. Most of the soldiers died first days after the battle because their wounds were not treated. In this situation, the devout humanist Dunant organised voluntary aides from within the area and bought bandaging material and food. He and his aides paid no attention to the nationalities of the wounded, the motto was soon ‘Tutti Fratelli’ in Italian – ‘All brothers’ in English. In 1863, out of this spontaneous help action came into being the Red Cross. For his untiring engagement for peace, Dunant received in 1901 the first awarded Nobel Peace Prize, together with Frederic Passy, the French economist and peace activist. (Incidentally, there is also a Dunantgasse in the 21st district).

“Bertha von Suttner commented critical, when Dunant was awarded the Nobel Peace Prize, that he had not accomplished anything for peace, only had lessened the consequences of the atrocities of wars.”