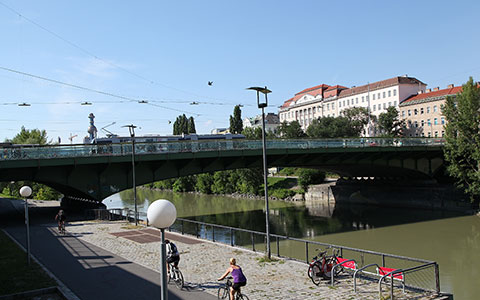 How many squares and streets in Vienna refer to peace? And how many refer to violence?

“In a culture of peace conflicts should be handled with dialogues and mediation, confrontation should be substituted with cooperation. We must overcome social and cultural injustice and repression.”

Vienna successively went hereon changing traffic areas that up to then carried the names of members of the imperial dynasty or of saints. They reminded one thereby of the overcoming of the reactionary, Catholic imprinted Habsburg monarchy: Church and Kaiser should no longer be honoured but rather the thought on freedom, democracy and peace.

A good example of this is the Friedensbrücke that traverses the Danube Canal between the 9th and the 20th district. Its old name was Brigittabrücke (also after the holy patroness of Brigittenau). As the bridge had already shown itself to be no longer fit for the continuously growing auto traffic, it was newly erected and in the year 1926 it was renamed to commemorate the Peace Agreement of St. Germain.

A similar example nearby is Schwedenplatz. This square, originally Franz-Ferdinand-Platz, received its new name after the First World War by way of thanks for the great emergency measures that the Swedes provided to the needy population of Vienna. During the “red Vienna” period during the 1920s and early 1930s, many squares and streets in Vienna were given new names in connection with the humanitarian help received from Scandinavian countries.

However, the reference to acts of war are still obvious: whether generals, battles or military fortifications – over three hundred street names recall the Turkish Siege of Vienna, Napoleonic Wars or the denominational wars of the 16th and 17th centuries.

It is worthwhile, however, to proceed to seek for others that lived their life in the service of peace work and humanitarian aid – who are unfortunately hardly known till today by the majority of the Viennese population.

20 minutes by Underground U4 and U1