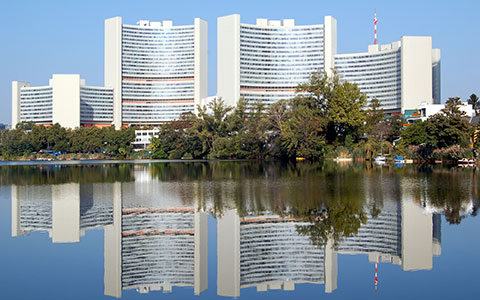 The exterritorial institutions of UNO are located in New York, Geneva, Nairobi and Vienna. Their mission is to secure and maintain peace.

“It is obvious time and again, that the process of peacemaking is understood in different ways, according to one’s standpoint and interests.”

On Wagramerstrasse 5 the building complex of the United Nations is located, whose most important duty is the safeguarding of world peace, the protection of human rights and the support of international cooperation. The United Nations arose from the Haager Peace Conference and the League of Nations after the Second World War. The establishment and development of these organizations were always important concerns of peace movements.

The Nobel Prize Committee in Oslo elected Mohamed El Baradei as award winner for the Nobel Peace Prize because of his with civil courage openly expressed criticism of the published assertion by the US Government that atomic weapons armouries exist in Iraq. This supposed danger was indeed the essential given reason for the then as necessary declared war against the Iraq by the USA.

Mohamed El Baradei, during the time of the preparations for the Iraq war, openly said what millions of people worldwide meant and for this took part in demonstrations and protest actions. His fearless criticism made him the target of sharp diplomatic attacks from sides of the US Government. Mohamed El Baradei was born 1942 in Egypt; in 1964 he began a career as diplomat, shifted then to New York to the United Nations, 1984 to the IAEO, International Atomic Energy Agency, where in 1997 he became General Director.

Without a doubt, the Norwegian Committee decision about the awarding of the Nobel Peace Prize, in which it directed attention to the subject of nuclear matters, contributed again to the reminding of the tremendous danger of this weapon. But many people worldwide who campaign for a general stop of the use of atomic energy view the activity of the IAEA very critically. The organization supports the peaceful use of atomic energy. The idea for the establishment of such an agency, is attributed to the US President Dwight D. Eisenhower and his ‘Atoms for Peace’ – speech in 1953.

Since 1957, the IAEA advises worldwide interested parties with money and know-how about the building of nuclear power plants and about the use of nuclear energy in medicine, engineering and farming. With the award to the IAEA, the Nobel Committee made a highly doubtful decision.

The seat of the IAEA, with the departments engineering cooperation, nuclear energy, nuclear security, administration, nuclear sciences and use, as well as nuclear material safeguarding (‘Safeguards’) is known as the Vienna International Centre (VIC).