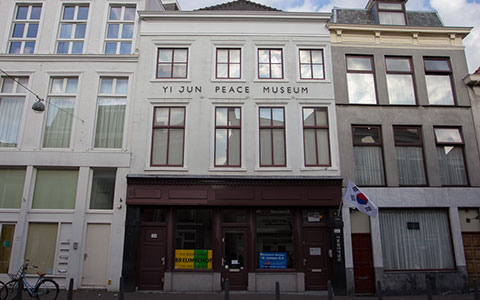 The former De Jong Hotel hosted the Korean delegation during the Second Hague Peace Conference in 1907. The memory of lawyer, diplomat and peace activist Yi Jun is still honoured in both North and South Korea.

“It is my dream to build a stage of empathy for the first time in history in the Japanese Archipelago and the Korean Peninsula, the place where three nuclear superpowers meet.”
– Akio Komatsu

Lawyer Yi Jun (1859-1907) spent most of his career as a judge in Seoul. He also was a legal reformer and an educator, founder of numerous schools and institutions, such as the Korean Red Cross. After the Russo-Japanese war of 1904-1905, when Korea became occupied by Japan, Yi Jun strongly protested against the violation of international law.

In 1907 Yi Jun and the diplomats Yi Sang Sul and Yi Oui Jong were designated by the Emperor of Korea to attend the Second Hague Peace Conference. They hoped to gain international recognition of Korea as a sovereign state and to protect the country from annexation by Japan. However, at the opening of the conference the delegation was denied entrance. Their protest received worldwide publicity through W.T. Stead’s journal Courrier de la Conférence de la Paix (copies of which are displayed on the walls in the museum). Stead called the exclusion of Korea a ‘supreme denial’ of the pacifist cause: “Is there no justice in the world, not even in The Hague? Why not clearly admit that the cannon is your only law and that the powerful cannot be guilty?”

On 14 July Yi Jun was found dead in his hotel room. The exact cause of death has remained uncertain until now. The incident dramatically illustrates the exclusion of colonized and oppressed peoples from the Hague Peace Conferences. In 1907, Africa was not represented at all; from Asia, only the empires of Turkey, Persia, China and Japan and the kingdom of Siam (Thailand) could take part. Korea was excluded under pressure from Japan that claimed the same rights as Western colonial powers.

The hotel building was purchased by Kee Hang Lee and his wife Chang Joo Song as private citizens, and opened as a peace museum in 1995. Commemorating Yi Jun, it aims to educate people in his spirit of justice and freedom, and to further the higher cause of world peace. The Yi Jun Peace Museum receives visitors from all over the world, especially from North and South Korea, China and Japan. A regular visitor is for instance the Japanese industrialist and peace philanthropist Akio Komatsu, quoted above. Yi Jun’s legacy inspires to build a culture of peace, not only in eastern Asia, but also between Western and formerly colonized peoples