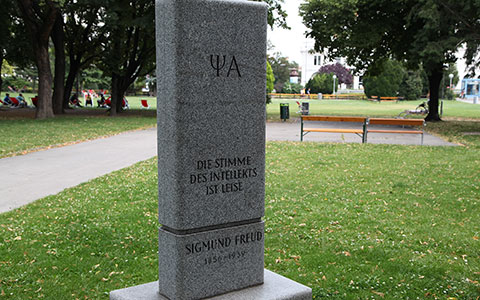 Tourists, students of the nearby university, families – life full of colors populate this park.

In Sigmund Freud Park, in front of the Votiv church, Mayor Dr. Helmut Zilk unveiled a memorial stone on May 6th 1985. Under the letters Psi and Alpha – Freud’s abbreviation for ‘psychoanalysis’, is written ‘The voice of the intellect is a soft one’. Freud’s original words were:

“The voice of the intellect is a soft one, but it does not rest until it has gained a hearing. This is one of the few points in which it may be optimistic about the future of mankind ….”

Peace studies also analyze the psychodynamic process of decision making beyond the factual levels and beyond reason. In an exchange of letters in 1932, Sigmund Freud and Albert Einstein grappled with the question ‘Why war?’ Albert Einstein’s question was whether some sort of way could exist to free people from the fatality of war?

Sigmund Freud referred to the connection between law and violence during the history of man. Individual violence will be replaced in the course of social development by institutionalised forms. From time immemorial, the renunciation of instincts influences this process of civilization. Everything that promotes this cultural development, meant Sigmund Freud, also works against war.

Sigmund Freud (1856 – 1939) was a neurologist, he developed psychoanalysis, a method with which the unconscious mind becomes understandable. As a Jew, his career possibilities in Vienna were very limited and with the begin of the reign of the National Socialists, he was threatened despite his international fame. He was able to flee to England.