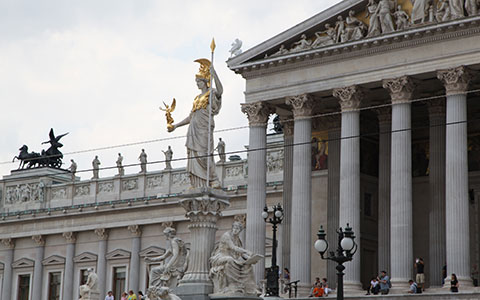 Democracy demands to assume responsibility even for those decisions one would not have chosen.

“All human strive and joint acting and all legislative decisions should aim for peace.”

The historical conference hall of the Reichsrat building finished in 1883, that we today call Parliament, offered room for the representatives from Bukovina to Dalmatia, but today it is mostly used for meetings of the Federal Assembly and for State acts by which both chambers of the Parliament are present.

In this room is to be found a mural painted by August Eisenmenger (1830–1907). He was an Austrian portrait- and historical-sights-painter during the era of the ‘Gründerzeit’ – respectively in the period of rapid industrial expansion. In 1885, he completed the cycle of mural compositions about the ‘Development of the modern political system out of unorganised conditions’, that remains originally until today. A segment about the ‘Blessings of Peace’ refers to the meaning of this theme. Peace at the end of the 19-hundreds became the basis point of reference for engaged politics, to the highest goal of hope for a new social order. The humanistic and tolerant tradition of the Enlightenment laid the fundament for this development, in which bridges must be built between national and global interests.

An example for this change in the reasons of state is the importance of the Interparliamentary Union (established 1889 in Paris), that holds meetings in several participating countries, some of them since 1903 in Vienna. Central concerns of the Interparliamentary Union are the support, establishment and development of democratic facilities and to support the matters of peace and cooperation on a global level. The Austrian branch of the IPU was co-established by Bertha von Suttner. Nowadays the president of the parliament is always the head of the national branch of the IPU.