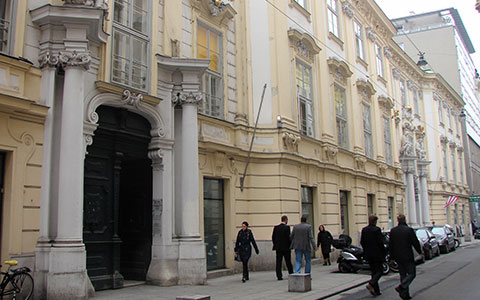 Let history be a teacher, and let us not forget!

In the ‘Altes Rathaus’ (Old Town Hall) we find the DÖW, (Documentation Archive of the Austrian Resistance during the time of National socialism). This institution was established in 1963 by former men and women resistance fighters as well as by dedicated scientists. The DÖW is a foundation which is supported together by the Republic of Austria, the City of Vienna and the Association of Documentation Archives. The Association and Foundation undertakes to provide information and does resistance research, collects, does archiving and presents the work results.
Through counselling- and care work activities, the DÖW has contributed to the historical understanding that the original ‘Victim Theory’ officially attributed by Austria (Austria was the first victim of the aggressive policy of Hitler) finally is no longer applicable. The terrible effects of sympathizers following the demands of power get compared to the courageous acts by resistance fighters and those persecuted. Clarification about the dangers of indifference and the lack of civil courage is a central theme of the work of the DÖW. Respective learning materials for schools and for adult education are being developed.

Also in the ‘Altes Rathaus’ (Old Town Hall), on October 30th 1891, the foundation assembly of the ‘Austrian Society for Friends of Peace’ took place. In this Peace Society established by Bertha von Suttner, Alfred Nobel was also a member and generously supported the organisation financially.

Alfred H. Fried wrote in his diary: The newspapers did not consider it worthwhile to report about this event, for them it was laughable.