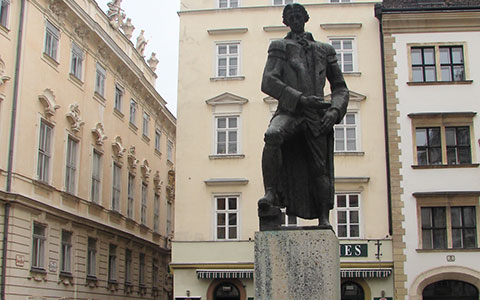 Peace emphasizes the culture of the mind.

“Tolerance and equality of all three monotheistic religions is this statue about: Jewry, Christianity and Islam.”

Here we want to remember an early annunciator of tolerance and liberal emancipation. Gotthold Ephraim Lessing (1729–1781) furthered the Enlightenment with his poetic works and formulated an appeal for inter-confessional tolerance in his Ring Parable in ‘Nathan der Weise’ (‘Nathan the Wise’ 1779) which until today has remaining validity.

The actual conflicts pro and contra Islam proof that even in mostly atheistic societies religions can get exploited for fanatic and violent claims of truth. But there cannot be ‘the true’ religion since all religions have their origin in God. Peaceful tolerant coexistence is needed. Lessing’s memorial stands on the Judenplatz in the 1st district since 1981. The memorial was created in 1935 by Siegfried Charoux, four years later however, it was removed by the National Socialists and later melted down so as to then be newly created in 1968 by the same artist. Initially it stood on Morzinplatz and was then brought back to its ‘old’ installation site on Judenplatz.