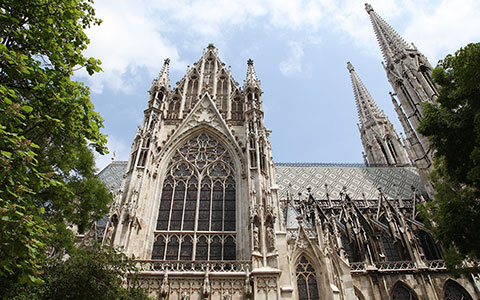 Resistance against a totalitarian regime needs an enormous courage.

“…this, what we call peace, this is war…the war, the real war is just the explosion of the war which we call peace.”
– Ingeborg Bachmann

In der Votive church, one of the high church windows in radiant colors reminds one of Franz Jägerstätter (1907 – 1943), an Austrian who, in Christian conviction against violence and in courageous civil disobedience, refused military service under National Socialism. Following Austria’s annexation by the German Reich on March 12th 1938, he refused the offer of the post of Mayor that was made to him. By the national referendum on the annexation on 10 April, his was the only no vote in his home village. The election authorities withheld this dissenting vote and notified 100 percent approval. He later described this day as the Holy Thursday of Austria” because “the church of Austria let itself be taken prisoner”.

The negative impressions about National Socialism and the so called euthanasia programme, about which he learned, strengthened his decision not to enlist in the military. Despite imprisonment and torture, Franz Jägerstätter stayed true to his conscience. He was executed on August 9th, 1943. The beautiful window picture in the Votive church was dedicated to him and since 1993 there is also the Jägerstätterstrasse in the 14th district.

At the turn of the year 2012 a group of asylum seekers occupied the Votive church with a “Refugee Protest Camp”. They wanted to draw the public attention towards their shameful inhuman situation as asylum seekers. Caritas and some NGOs supported them in a makeshift manner.

The media presented and commented this protest in quite diverse forms. But at least the problematic situation received some public attention. Nevertheless after more than 2 months of this occupation and a severe hunger strike of some occupants the asylum seekers set an end to their activity, although they did not achieve crucial improvements.