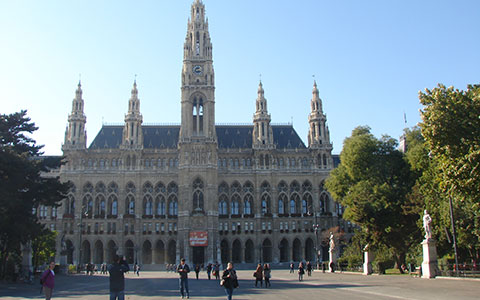 Today the City Hall Square is mostly occupied by mass entertainments. On May 15th 1982 it was the center of a huge protest march.

This demonstration march was the largest peace demonstration of the post-war era. From all federal counties thousands rushed to meet in the capital to protest against war and armament. The short phase of political détente in the seventies was then over and the arms race in the west and east took on up to then unknown levels. The USA under President Ronald Reagan enormously raised the expenditure for the military (among others for the so called ‘Star Wars-Program’) and the discussion about the stationing of American Pershing-rockets in the Federal Republic of Germany was fiercely waged.

As the Falkland War also broke out in April 1982, no less than 160 different organisations and political parties (with the exception of the Austrian Freedom Party) mobilised for a large peace demonstration in Vienna: The Official Austrian Representation of University Students, the Youth Party, the church, unions, anti-atom movements and many more. People from all Austria streamed with buses and special trains into the capital city and gathered together on the Rathausplatz (City Hall Square) for a demonstration against war and armament.

In the Rathauspark stands the bust of Josef Popper- Lynkeus (1838–1921) who was an engaged social reformer. As it was impossible for him, as a Jew, to have a scientific career in Vienna, he worked in the service of the railway and as a private teacher. Additionally, he studied economics and developed the programme ‘The general nutritional responsibility’ in which he described and introduced his suggestions for equality and human dignity. He designed a social structure in which all state citizens would be cared for with an existence-minimum. A compulsory period of several years work service must be accomplished. Following this, all citizens receive a basic income without conditions until death. Popper, therefore, is one of the forerunners of the idea of the unconditional basic income that meanwhile, based on new economic developments, is predicted to be the future economic structure of our society.