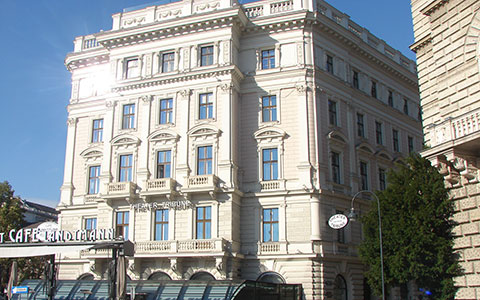 Art and intellect for mutual understanding of nations.

“She was engaged for the hope for peace through cultural exchange, by multiple ways of art to cross borders, not to eliminate the differences between countries but to make use of them for innovations.”

A few floors above the Café Landtmann once came together international artists and free thinkers in the salon of Berta Zuckerkandl (1864 – 1945). She was supportive of then modern art and engaged herself for a policy of peace and international understanding.

Born in 1864, she was a member of a wealthy Jewish Vienna family with very close contacts to the Kaiser’s Court. Her father, Moritz Szeps, was not only an influential journalist but also a confidant of Crown Prince Rudolf, who actively put himself against the all too conservative policy of the imperial dynasty, his own family. Rudolf represented democratic views and supported, as far as it lay in his power, the liberal media of his time. 1889 he shot himself together with his woman friend in Mayerling.

Berta Zuckerkandl especially expressed the liberal attitude of her parental home in her daily column in the ‘Neuen Wiener Journal’ (New Vienna Journal). She was a bitter opponent of Chancellor Engelbert Dollfuss, who after the February 1934 Civil War established the Austro-Fascist corporative state against the worker’s movement in Austria. In 1938, following the seizing of power by the National Socialists, Berta Zuckerkandl flew to Paris. In summer 1940, after the occupation of the German ‘Wehrmacht’ she had to flee again (being 76 years of age) and reached Algeria where her son was staying. There, following the liberation of North Africa, she engaged herself again for peace and understanding among nations with speeches over a radio station established by the Allies.

In 1945, she was still able to live to see the defeat of the Third Reich of the National Socialists and returned to Paris, but died in October of the same year. A commemorative plaque on Palais Lieben-Auspiez, Oppolzergasse 6, reminds one of this courageous woman.