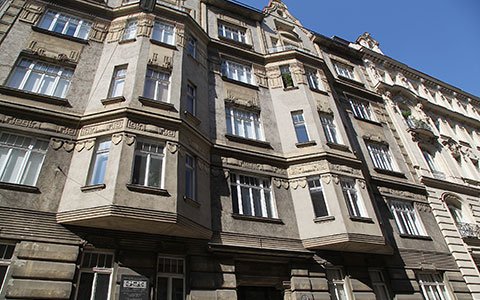 The other Austrian Nobel Peace Prize award winner, Alfred Hermann Fried (1864 – 1921), has become completely forgotten in our country. The only remembrance of him in the public life of the city of Vienna consisted until recently in the Friedstrasse, in the 21st district. And at the urn cemetery in the Vienna Central Cemetery one finds a reference to the untiring pacifist. In the year 2011, in memory of his award one hundred years before of the Nobel Peace Prize, a memorial plaque was mounted on his home in Widerhofgasse 5.

Alfred Hermann Fried was the first peace journalist and he called himself this. He, however, also developed the social-scientific peace studies, wrote the “Handbook of the Peace Movement”, which until today is the established international standard work. He set against sentimental “moral pacifism” a new slogan “Organize the world!” as an expression of the stance of scientific pacifism.

In place of the usual peace symbols like pigeons, rainbows or broken swords, he developed a new emblem, namely a row of intertwined cogs, in order to embrace new, precise and scientific meanings of the term peace. Unfailingly, he thereby avowed himself to thinking in international dimensions. Only the willingness to see oneself and one’s country as part of a peer community can set free energies that would lastly benefit one’s own national community. He came to the conclusion:

“Internationalism is patriotism on the highest level.”

Fried was 27 years young when he made contact with Bertha von Suttner and worked more than 20 long years in best cooperation together with her as a peace researcher.

At the age of 47 he received the Nobel Peace Prize. Ten years later he died poor in Vienna. Nevertheless, during these barely 30 years he developed with unbelievable enthusiasm for work significant principles for peace research and peace journalism. He was, however, hardly known to the broad general pubic already during his lifetime. Until today, he is practically forgotten as an Austrian Nobel Peace Prize laureate.

Pacifists have it hard to become honored, and he was not only a pacifist, but also Free Mason and Jew. Our Austrian culture of remembrance is apparently over challenged with this combination.